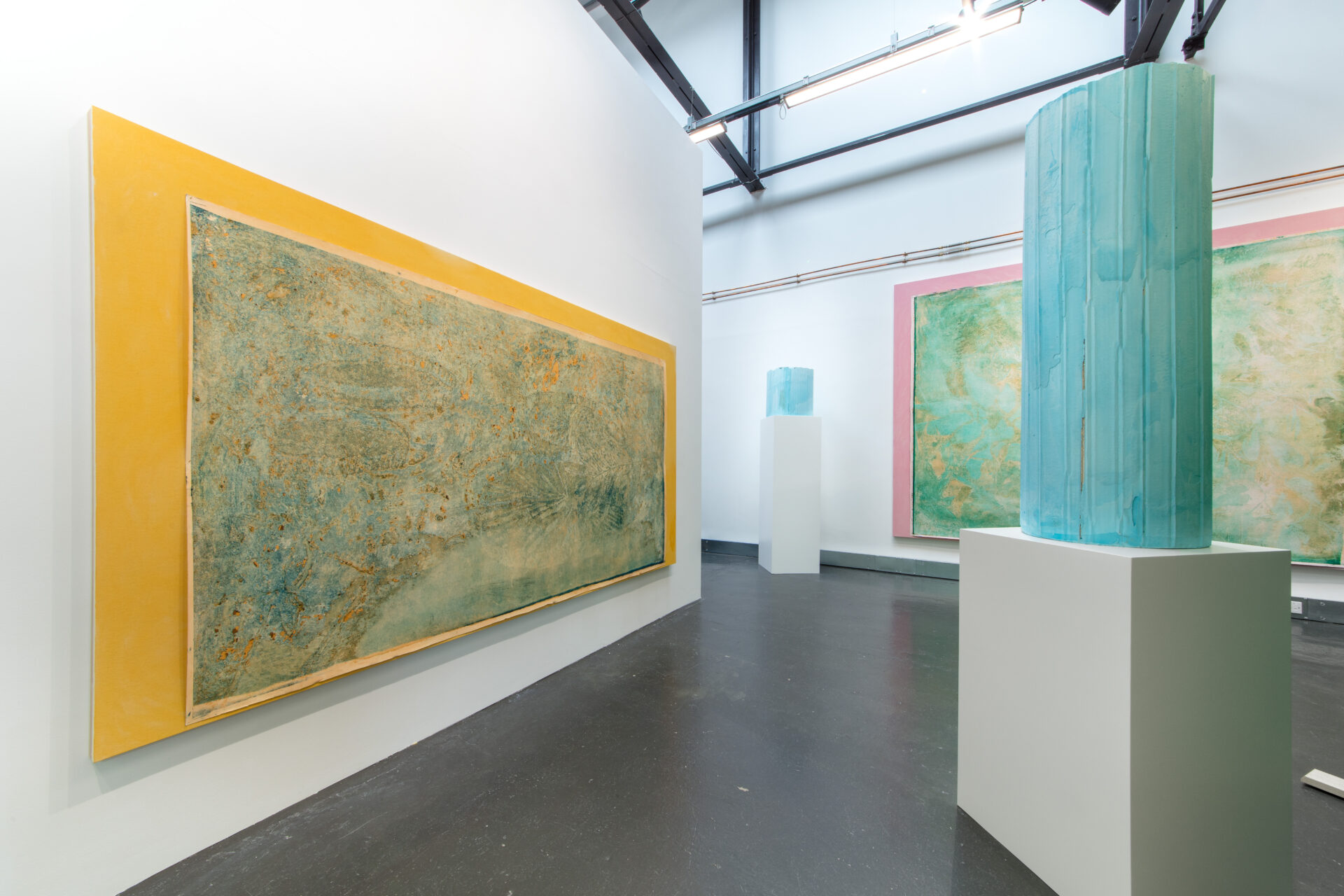 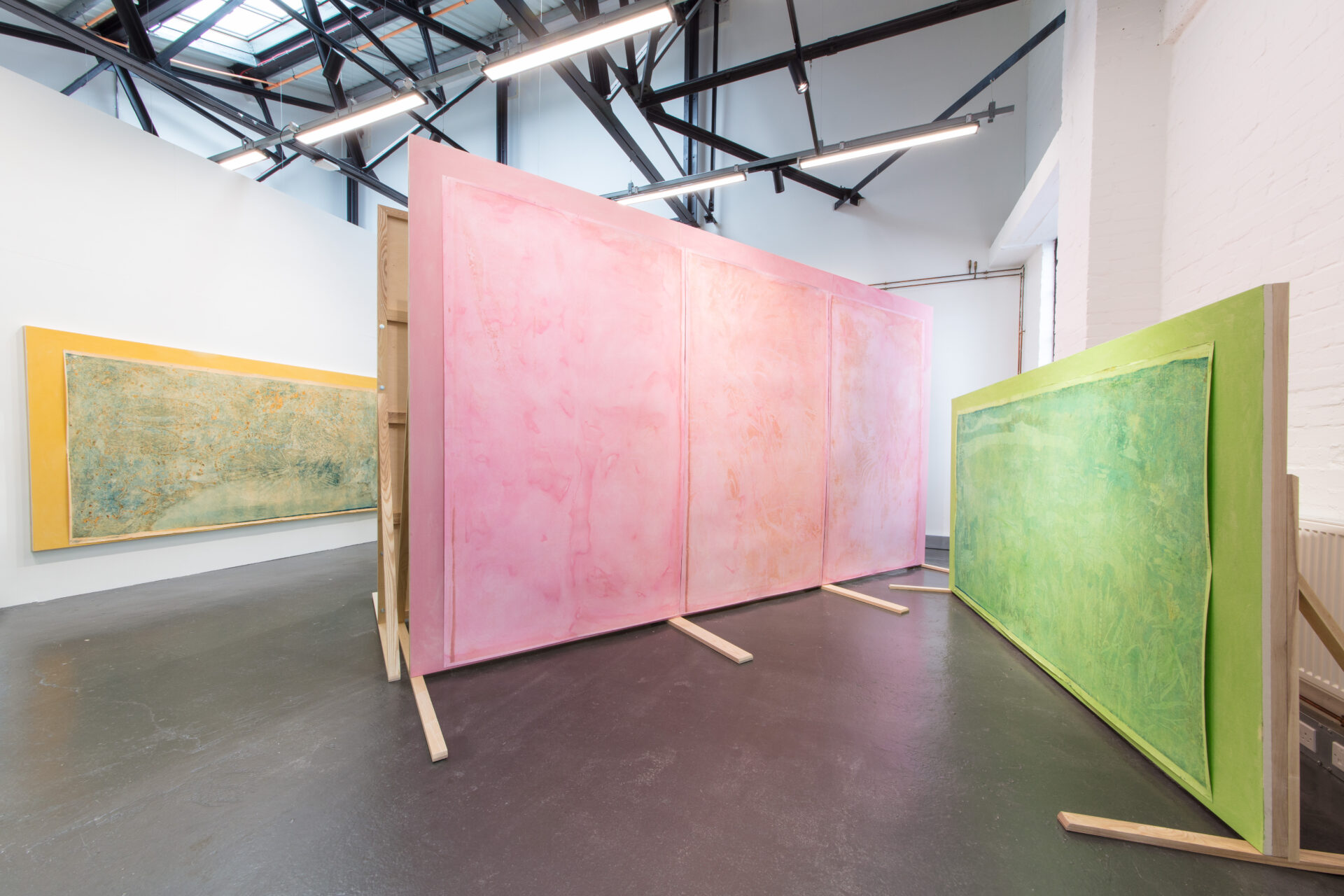 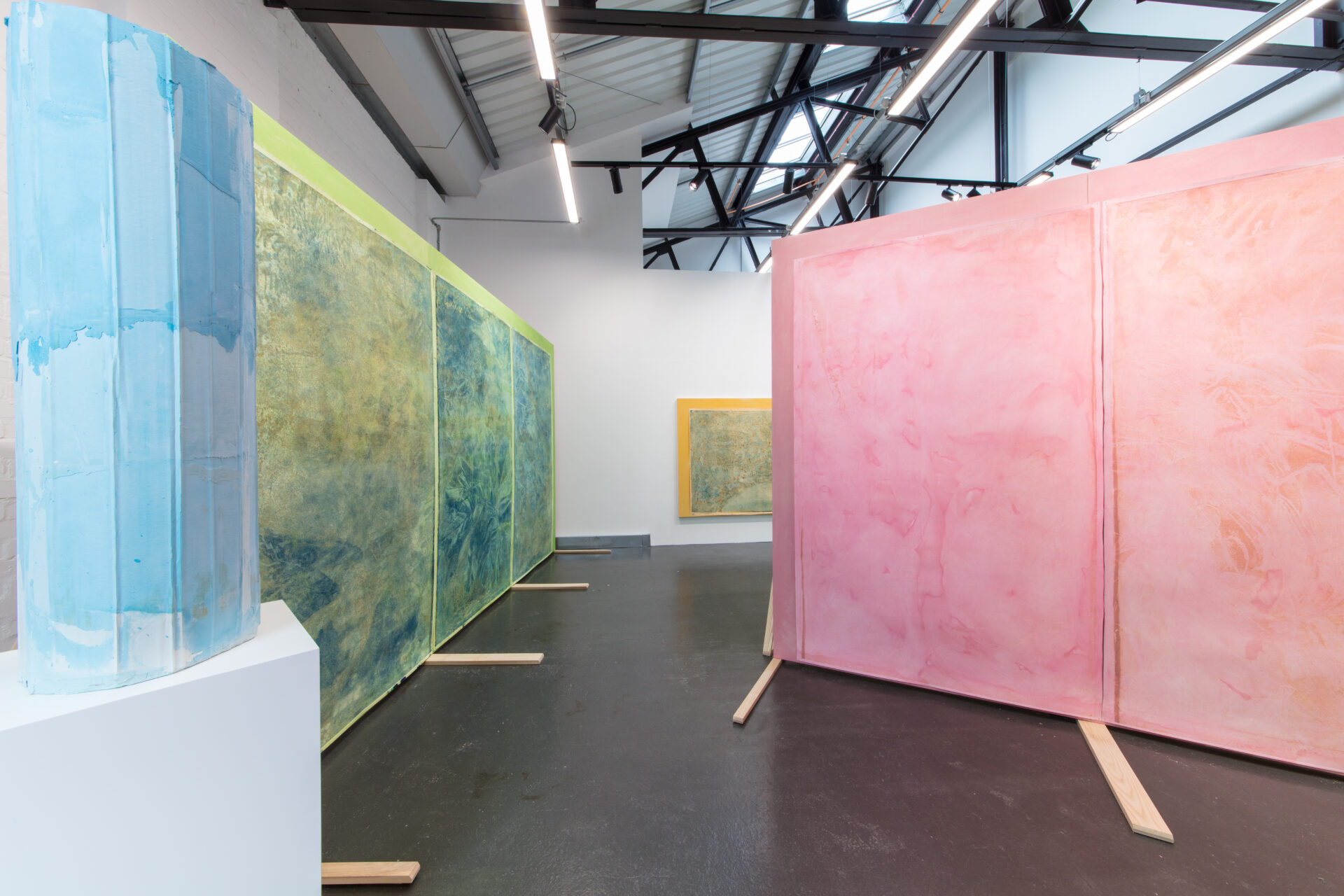 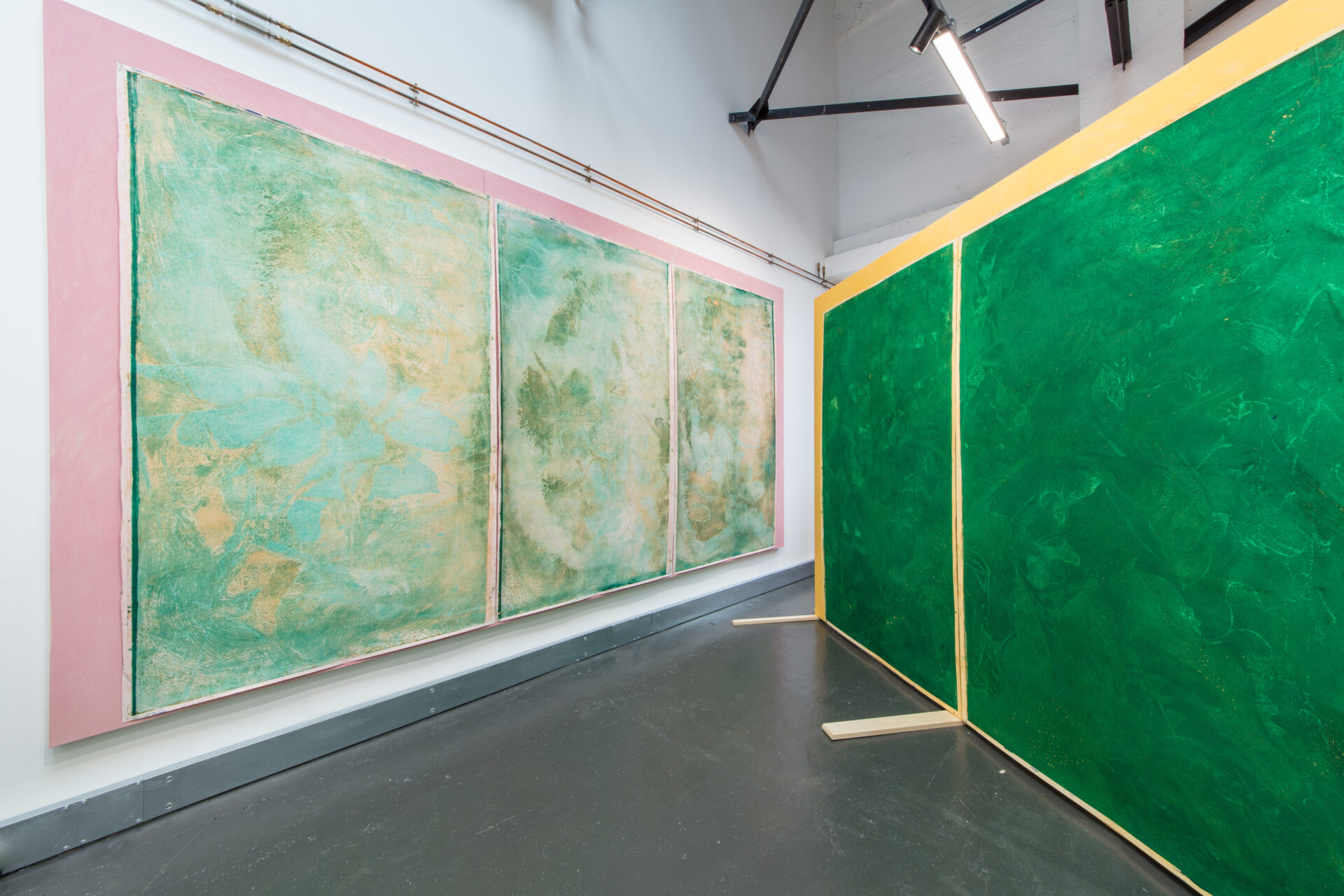 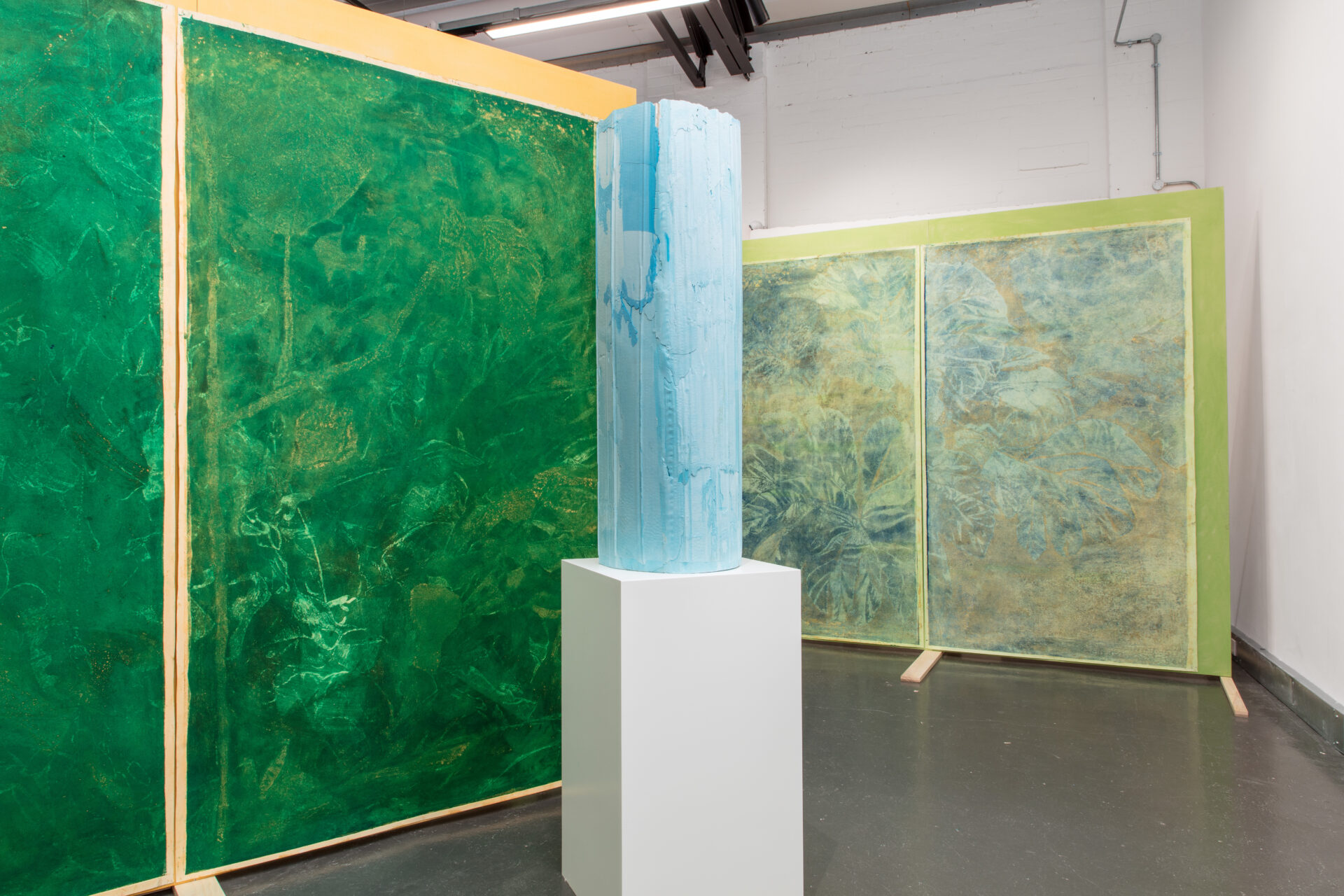 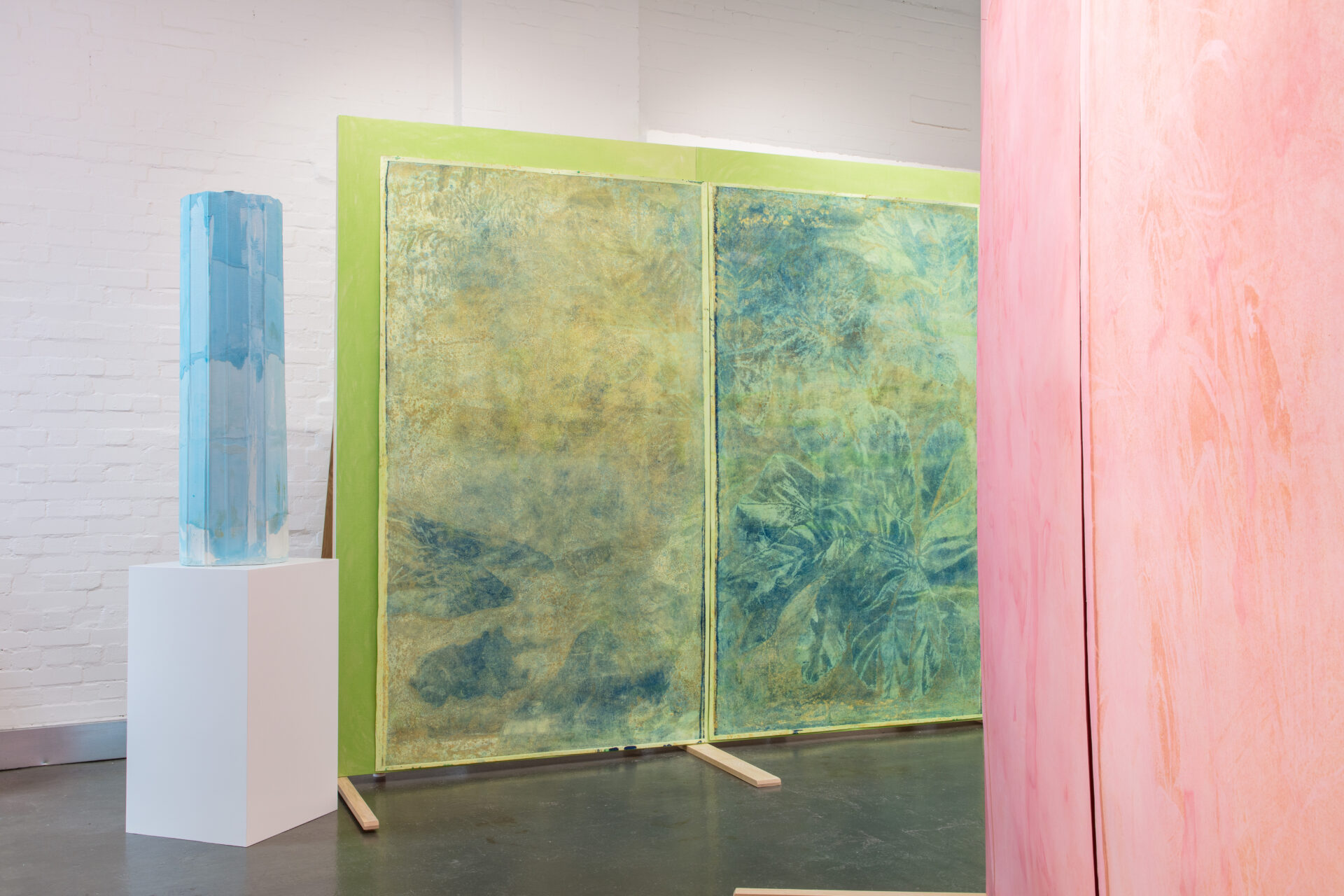 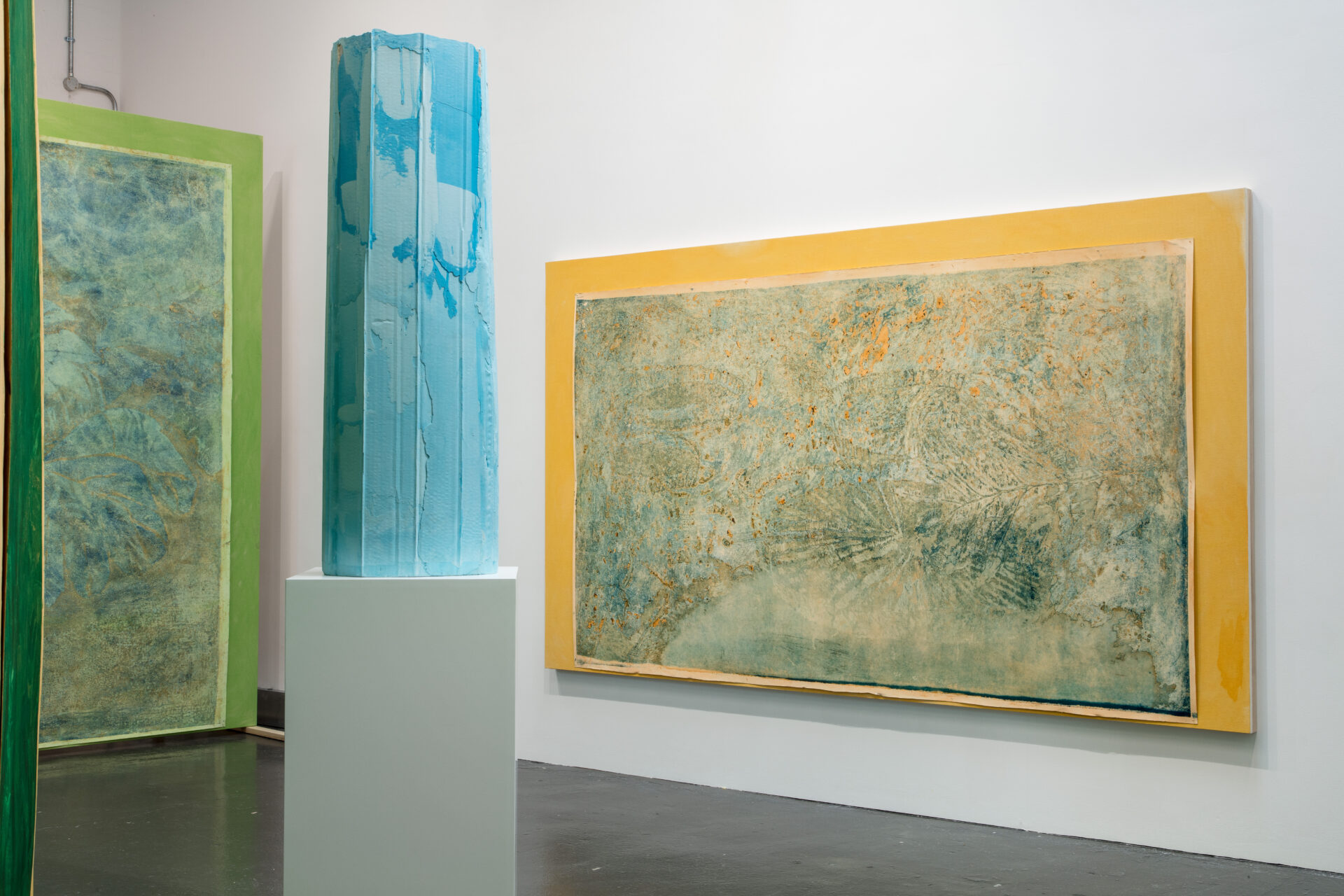 Elizabeth Xi Bauer is thrilled to welcome Theodore Ereira-Guyer’s exhibition The Thicket, his first solo presentation at the gallery. On this occasion, the artist shows a series of large-scale, never before seen etchings that continue his ongoing investigation into the subject of memory – what is kept and what is left behind. The process of printmaking, especially the way Ereira-Guyer practices it, necessarily involves a loss of information between the plate and the paper. Even if it is a technique aimed at reproducibility – though as we know, the artist favours single or just a few compositions being generated per plate – every time a print is made, different aspects are emphasised whereas others are lost. Ereira-Guyer thus establishes a parallel between printmaking and the very mechanism of remembering. Whereas some of the etchings on show are exhibited hung on walls, in a more conventional manner, others are displayed throughout the space, over structures that resemble screens or billboards. This maze-like architecture aims to create an immersive environment where viewers feel nested by the works, encouraging a sense of intimacy between person and object.

In The Thicket, the artist exhibits both a homonymous series and another titled The Pond. Both are magnanimous in size, nearly at the limit of what is possible to do with paper without tearing the material apart, but present fundamental aesthetic differences. The Pond works are horizontal compositions whose imagery, as the artist makes clear in the title, address the mud-like vegetation that is typical from such environments. They are hung on the walls as individual works in a rather low height, close to the floor, emulating ponds as they exist in nature. These etchings are attached to wooden boards that are dyed in strong colours; each of the combinations aims to create a harmonious palette between composition and wood.

In turn, the homonymous series follow a contrasting pattern between wood and paper, for instance pairing an orange frame with a dark green composition, or a green frame with a blue one. Moreover, here the wood has a sculptural quality, occupying space in addition to serving as support. These are billboard-like structures, where visitors are welcome to stroll both in front and in the back of them – though the prints are only attached to their front. Unlike The Pond, they are vertical compositions – always taller than men – that are exhibited in groupings of three, creating a sense of continuity or narrative between the individual parts, reinforced by the fact that they share a same colour scheme. Nonetheless, each of the works is unique and individual. Here again there is a direct relation between title and imagery, and what we see on the etchings is a rich and lush variety of plants.

The artist completes this presentation with a series of blue sculptures titled Columns made of pigmented plaster, that are scattered around the exhibition space, as punctuation marks. Both in the way they are cast and in the way they are coloured, they look unfinished, ambiguous in whether they are still in the process of being made or already falling apart. For that reason, they remind us of what the anthropologist Claude Lévi- Strauss declared when he visited Sao Paulo, Brazil, in the 1930s: “Here everything looks like it is under con- struction, but it is already in ruins”. Again, with this series, Ereira-Guyer evokes the unreliable and often fleeting nature of time passing – and indeed, memory.

Theodore Ereira-Guyer was born in 1990 in London, and shares his time between London and Lisbon.